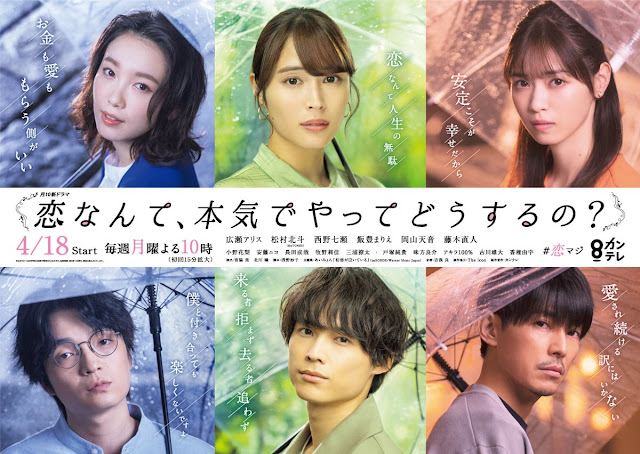 Title: Koi nante, honki de yatte dousuru no? (恋なんて、本気でやってどうするの？)
Season: Spring 2022
Broadcast by: Kansai TV
Rating: 3 / 10
Recommended for: fans of the cast and those who don't mind watching a 90s' trendy drama-style story in the modern era
Liked:
- The cast did look promising in the beginning and the premise of the story suggested by the title did look appealing.
Disliked:
- The story which was very 90s in its developments, seemed really out of place in the year 2022. Even the camerawork had the vibe of yesteryears. When I checked the scriptwriter Asano Taeko's past works, it struck me that this drama seemed similar to 1997's "Love Generation". Back then, Kimura Takuya's character was pining for his brother's girlfriend while Matsu Takako's character couldn't trust him because she didn't think he was fully committed to her and she hated herself for doubting him. In this drama, Matsumura Hokuto's character couldn't get over his mother's treatment of him and what she had become (an alcoholic and kleptomaniac) after her failed marriage and this was affecting his relationship with Hirose Arisu's character who just couldn't trust that he would be able to make his own decisions rationally and yet she couldn't make him choose her over his mother.
Which is a pity though because Asano had written radical/cutting edge works in the past like "Last Friends" and "Kare, Otto, Otokotomodachi" so I don't see why this drama must go back to the 90s' style. Or if it must be done, it could have been more compelling or updated with a modern angle to better engage the viewers.
- Clichés and unnatural developments in the story made the whole drama really awkward and not in sync with its title. Don't even get me started on the last few scenes in the finale. If going by the title that these characters had no compelling reason to be serious about love or saw no reason to do that, then what is a straying housewife and a woman out to seek companionship (money as an accompanying incentive) by sleeping with a married man doing in such a story? Of course these people can't afford to be serious about love!
- Due to the limitations of the story, the cast were no doubt affected in terms of what they could deliver. Character development was really lacking and everything was clearly touch-and-go so it was difficult to feel for these characters and empathize with what they were going through. That's a big no-no for romance stories because if viewers don't feel the engagement with the story and characters, they won't stay till the end of the drama.
Posted by Chiaki at 12:34 PM