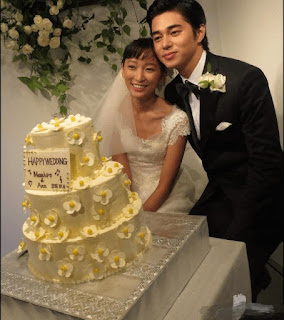 This has got to be the shocker on Wednesday as more details of what happened started coming out during the day. And it's especially ironic when this couple had a fairytale-type of love story and was well-known for being so much in love and supposedly having a happy marriage. Another example of what looks good may not actually be the case in reality.

Of all the reasons that can lead to a marriage's breakdown, this could have been the worst and most unacceptable for An especially considering how she reacted to her father's infidelity (more than once somemore and he even did that to his second wife Minami Kaho who was battling cancer). To think that her husband did the same as her father and while she had to take care of her twin girls and was pregnant with their third child when the affair supposedly started. I can't imagine how she must be feeling now that this is out in the open.

And the other woman in this whole fiasco - Karata Erika who turned off the commenting function on her Instagram and deleted all her photos of Higashide there on this very day when the news broke. Isn't this tantamount to admitting to what was reported? The media is also focusing on the fact that Karata was in fact underage back then when the affair supposedly started while she was filming "Netemo Sametemo" with Higashide. It does make me feel rather uncomfortable to recall that what I saw in that movie could have been real emotions between the leads rather than just acting. And I actually attended the screening in SG which Higashide appeared at. Who would have thought that something like this would happen a few years after that?

Well, I do think that being young and underage certainly doesn't make you less responsible for what you did because the whole world knows that this man is married and has kids. And Higashide being 10 years older than her also didn't make him mature enough to resist the temptation. Both parties are equally at fault. Age certainly doesn't matter at all when people do foolish or wrong things. Sigh!

Last but not least, the cast of "Keiji to Kenji" especially the co-lead Kiritani Kenta will probably not welcome this unwanted attention and backlash against Higashide which could hurt the ratings of their drama. That's such a pity because they certainly don't deserve to be punished for what they did not do.

And the media certainly won't let Higashide off once he starts the PR rounds for the new "Confidence Man JP" movie scheduled to be released in May.

At present, An has only admitted that they are living apart while Higashide has admitted to whatever was reported in "Shukan Bunshun" and apologised for his actions.

Here is a summary of the key facts in the report and Higashide's statement:

- News of An and Higashide living apart since early January 2020 first came out due to articles mentioning the report about their marital problems in the upcoming 23 Jan issue of  "Shukan Bunshun". It was suggested that he had an affair with an underage actress who is known for her pure image.

- When the media asked their agencies about this matter, both sides admitted to it. An's agency said that they aren't in a position to answer the media's queries on her behalf since this is her private matter. On the other hand, Higashide's agency added that he is trying his best to repair the relationship with his family and that they would like to watch over him in the meantime.

- An is living with their three kids in their family home while Higashide has moved out to stay at a rental apartment for singles since about 10 days ago.

- Later on in the day, it was revealed that the report in "Shukan Bunshun" supposedly included a photo of Higashide and Karata Erika while they were shooting the 2018 movie "Netemo Sametemo" in 2017. She was 19 at that time while Higashide was 29. In the movie, they played lovers.

- An and Higashide met while acting as a couple in the NHK morning drama "Gochisousan" in 2013. They got married in 2015 and welcomed the arrival of their twin daughters in 2016. Their son was born in 2017. An was pregnant with their third child at the time when the affair supposedly started.

- Apparently, An was uncomfortable with how close Higashide and Karata were e.g. Karata called him "Dekkun" affectionately and openly during interviews. He denied that there was anything romantic going on between him and Karata and supposedly promised his wife that he would not contact nor meet Karata anymore.

- "Shukan Bunshun" also dug up past "straying" incidents of Higashide's while he was dating An - he tried to get close to Honda Tsubasa while they worked together and had met Maki Youko alone. It was said that his relationships with other women caused much stress to An who even had to seek medical treatment. He had claimed at one time that An was imagining things and that there were no infidelity issues at all.

- An supposedly found out in Jan 2020 that her husband was still exchanging messages with Karata and they had agreed to meet up late at night. When she confronted him, he admitted to the affair and apologised. Up till winter 2019, Higashide would meet Karata once or twice a month at her apartment.

- When interviewed by a Bunshun reporter over this matter, An declined to comment but she was spotted without her wedding ring.

- Later in the day, Higashide's agency issued an official statement which mentioned that the facts reported in "Shukan Bunshun" are largely correct after they confirmed this with Higashide. They said that it was inevitable that he would be criticised and reprimanded by everyone for his foolishness, immaturity and lack of responsibility which led to this situation. Higashide is filled with regret and guilt as he realises the weight of his responsibilities and what he has lost as a result of his actions. The agency acknowledged that it will take a lot of hard work, effort and time for him to regain the trust he lost.
As for living apart from his family, his agency said that this was not a step towards divorce as they heard from Higashide that it was a much-needed cooling-off period for the couple before they can even begin to repair their relationship. He knows that it won't be an easy journey to fulfill his responsibilities as a husband and father and redeem himself after what happened. The agency called upon everyone for their understanding in the meantime as Higashide does what he has to do even though this process may take a long time.

Sorry, but I rather divorce a cheater than remind with one. Do this man actually think he can repair his relationship, no way. Anne should dump his ass get alimony, child support, and make him regret his action by taking the big $$$.

Ughhh i used to love him so much but now!! He is a fucking asshold!! Poor An and her child! Divorce the bastard and ruined him!!! May he and his mistress burned in hell

What an a**! A total womanizer... I used to think that he didn't need to act in Confidence Man since he WAS a Boku-chan in real life. We all thought he was a mediocre actor but seems like he was a good one since we all believed he was cute and nice!

I'd like to know who leaked the rumors.
An's agency? It's just so... weird that his agency didn't even deny anything and just said that "Yep, he's guilty". At least they didn't drag it out.

There are rumours going around that An's side or someone close to her side leaked the news because there were so many details and Higashide couldn't deny the report nor wriggle his way out at all. However, this is yet to be verified so let's just take it with a pinch of salt.

I absolutely blame Higashide more than Karata, just because he's been doing this long before he met Karata. If she hadn't stupidly fallen for his lines, he would have found someone else to cheat with. So as wrong as she was, he's worse because he's the one who falsely promised his faithfulness and has spent his entire marriage cheating. I'm saying this as someone who was married to someone who did the same thing. The various women involved were immaterial. The problem was the man, who I should have kicked to the curb the first time. And that's what Ann should do now. There's no happy future with a cheater.

I read on twitter that Anne had evidence of him cheating with not just Arata but also another actress? Is it true?

Since the first time I saw this guy's face. I had a strong feel that he was a total fckboy in real life. Just look at his face and how he grooms. Looks like a complete poser boy.