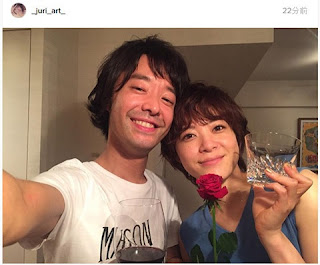 Ueno Juri and rock band TRICERATOPS' vocalist Wada Sho announced their marriage on 26 May through a fax statement released by their agencies. In the statement, they revealed that marriage was a natural progression in their relationship and they are very happy. The couple pledged to support each other and progress together in life. It was also mentioned that the couple started dating in the autumn of 2015 but have yet to move in together. Plans for a wedding are not confirmed yet and there will be no marriage announcement press conference.

On the same day, Ueno also uploaded a photo of her and her husband on her Instagram account. She revealed that the people around her were concerned about her relationship status and expressed her joy at being able to make the announcement at long last. Ueno commented that she was glad to be able to find a good partner and hoped that everyone will keep supporting them.

Ueno and Wada were first reported to be dating in April this year which the couple did not not deny. It was said that Ueno who had made it known that she is a big fan of TRICERATOPS, met Wada when she attended the band's concerts and was introduced by a mutual friend. Wada's father Wada Makoto is an illustrator while his mother Hirano Remi is a culinary expert.

Congrats to Juri and Wada! Never expected marriage to come so soon, but am happy for her that she's found her special someone.