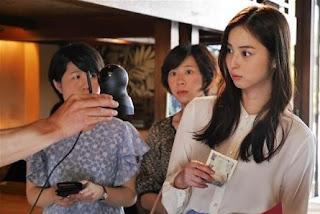 Sasaki Nozomi will be appearing in one of the segments in the upcoming drama SP "Yo ni mo Kimyou na Monogatari Spring 2016" which is due to be shown on 28 May. The story titled "Bijinzei" (Beauty Tax) is set in a fictional world where beautiful people are to pay the 20% beauty tax for the advantages they get through their looks. Sasaki plays a beautiful woman who does not want to pay the tax yet enjoys the "honour" of being a certified beauty recognised by the government.

Sasaki had been ranked in the top 100 beautiful faces of the world ranking by TC Candler for six years in a row thus was chosen to play this character. When offered the role, Sasaki commented that she found the script very interesting but she is not too keen on the idea of being taxed for being beautiful.