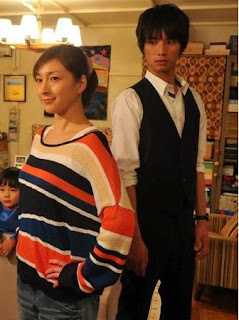 Hirosue Ryoko will take on her first drama leading role in 17 years through her appearance in the FujiTV summer 2013 drama "Star Man ~ Kono Hoshi no Koi" which begins its run in July in the Tuesdays 10pm timeslot. She plays the role of a 32-year-old  single mother by the name of Sawako who has to raise three sons and falls in love at first sight with a 25-year-old man played by Fukushi Souta, who Sawako finds lying on the roadside and on the verge of death. The drama will be directed by Tsutsumi Yukihiko who is known for his famous dramas such as "Keizoku" and "TRICK" while the script will be written by Okada Yoshikazu who is famous for his dramas such as "Saigo kara nibanme no koi" and "Nakuna, Hara-chan".

As Hirosue is also a mother of two boys who are 9 years old and 2 years old, she can identify with the struggles Sawako face especially when the latter try to get her kids ready for school in the morning. She also praised her co-star Fukushi for being good-looking enough for her to fall for at first sight. As for Fukushi, he commented that he saw Hirosue on TV when he was a kid so he feels amazed that he can actually work with her this time. Co-stars of this drama include Koike Eiko and Kansai Johnny Jrs Onishi Ryusei who plays Sawako's eldest son.

Source: Sanspo
Posted by Chiaki at 1:46 AM