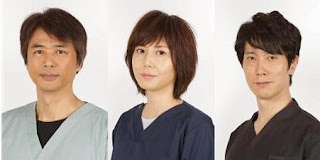 The 5th installment under the hit "Kyuumei Byoutou 24 Ji" series will be shown from July onwards in the Tuesdays 9pm timeslot on FujiTV where Matsushima Nanako will be the sole lead and play her role of emergency doctor Kojima Kaede again. Besides showing the issues facing doctors, the drama will also feature Kojima's problems as a 39-year-old woman.

In the latest installment, Kojima sets up a new team under her after she becomes the director of the Minato National University's affiliated hospital's emergency room department. Her team will come face-to-face with new types of problems such as juvenile crime, organ transplant and crimes in the city which are common in the society of today. Joining her will be Tokito Saburo who plays the role of Natsume Mamoru who is an expert in organ transplants and Sasaki Kuranosuke who plays Honjou Masaharu, a ER doctor who keeps clashing with Kojima on everything.

The theme song will be sung by DREAMS COME TRUE just like the previous four seasons and is written specially for the new drama.

Source: Sanspo
Posted by Chiaki at 1:32 AM