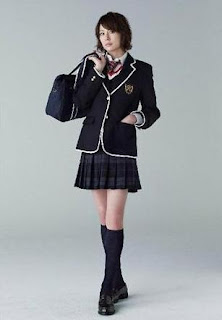 Yonekura Ryoko's image in her upcoming NTV spring 2013 drama "35-sai no Koukousei" (35-year-old high school student) was revealed to the press on 12 March. The drama begins its run from 13 April at 9pm on Saturdays. Yonekura plays a mysterious woman who attends high school at the age of 35 and solves problems in the classroom. Yonekura commented that when she was in senior high school, that was when loose socks began to gain popularity and she feels nostalgic about wearing a school uniform this time. Co-star announcements were also made today with Mizobata Junpei and Katase Nana joining the lineup.

Source: Sanspo
Posted by Chiaki at 1:26 AM