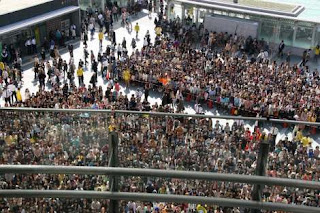 Ninomiya Kazunari embarked on a thanksgiving tour in 5 cities over 3 days and traveled a total of 4,200 km in order to thank supporters nationwide for helping his movie "Platina Data" cross more than 1.1m cinema visits and total takings of above JPY 1.35bn since it was screened from 16 March. The five cities were chosen after a barcode downloading contest where cinema-goers had to download the codes at 309 cinemas nationwide and the place with the most downloads was Fukuoka's T Joy Hakata which was the last stop of this tour. Ninomiya held a total of 18 greeting sessions for 8,500 fans in Tokyo (Shinjuku), Sapporo, Niigata and Osaka (Umeda) before reaching Hakata where he was met with cheers from 7,000 people who had gathered at JR Hakata station. He greeted the fans from a 3-storey high terrace and spoke Hakata-ben to them. Ninomiya also revealed that when Arashi comes to Fukuoka, they would usually eat ramen so he was glad to receive a 100-bowls free ramen coupon from the cinema. Besides the coupon, Ninomiya also got a straw rice bag when he was in Niigata and 450 takoyaki when he was in Osaka.