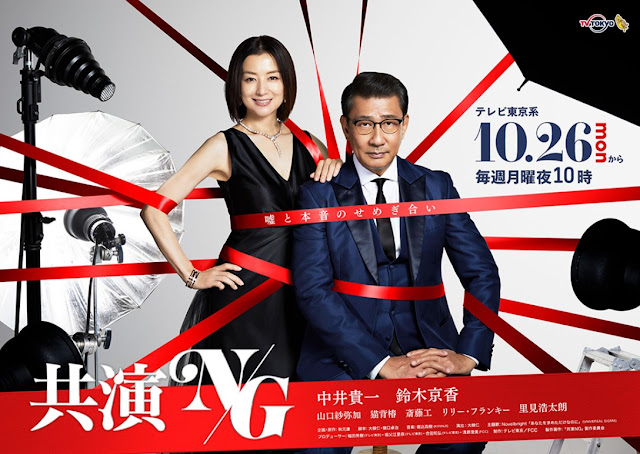 Title: Kyouen NG 共演NG
Season: Autumn 2020
Broadcast by: TV Tokyo
Rating: 7.5 / 10
Recommended for: those who want to get a glimpse into the world of drama production & the taboo topic of actors who can't act together for all sorts of reasons
Liked:
- The premise is interesting - actors who can't act together for all sorts of reasons, be it bad blood, rivalry or simply dislike for each other with no apparent reason, being forced to work together and behave as if they are chummy with one another on screen and in the public eye.
- A look into the world of drama production and the hiccups that happen along the way
- Great acting and chemistry from the cast especially the leads Nakai Kiichi & Suzuki Kyoka
- Although it seemed headed for a boring ending as seen in the incessantly long recap of the entire story, the twist at the end was a clever touch to round things up.
Disliked:
- The touch-and-go light approach - the story could have delved deeper into the taboo topic and the characters could have been more reflective of the rumoured Kyouen NG people in real life. As I see it, the story was trying to play it safe with a generalization approach since you can't really identify the real people in J-ent through these characters (less likelihood of offending people) who seem like an accumulation of traits from various people. That's why it feels like the story was barely scratching the surface of the issue underneath.
- Although the drama ended well, 75% of the last episode was so boring because of the extremely detailed recap through that to-and-fro interview between Saito Takumi & Hashimoto Jun. You need to have the patience to sit through it in order to see the good part at the very end.
- Saito Takumi's role - practically on remote mode throughout - I guess he's the only one in the cast who had it easiest since he didn't have to be on set. And his obnoxious character in the drama certainly didn't add any brownie points for him too.
Posted by Chiaki at 1:54 PM