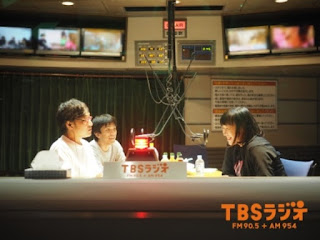 - Yamasato said that the reason why they decided to hold a press conference was to make a proper announcement to the media without holding back any information.

- During the press conference, one of the reporters asked about whether they had concerns of infidelity which was clearly directed at Aoi's past dating history and hinted at her being an enchantress which obviously and naturally made her upset. In his wife's defence, Yamasato had defended her by saying that the Aoi Yu he knows is very innocent and straightforward who laughs when she's happy and eats delicious food. He explained that this was why he responded as he did and that there was no such thing of her being a scheming enchantress as suggested.

- The couple had only informed a few of their managers about their plans to register their marriage so even their parents were kept in the dark. However, they didn't want the media to get wind of this before their intended announcement time of 2pm on 5 June. As such, they resorted to heading to a government office located in a prefecture next to Tokyo (didn't specify which one) instead of registering their marriage in Tokyo and headed there around 11pm on 2 June with the aim of letting Aoi become the first June bride of the Reiwa era (since 3 June was a working day). As the couple waited in the car, three of their managers headed to the government office to file the marriage application on their behalf. Unexpectedly, the trio were turned away because the officers in charge had concerns over the authenticity of the application and why three people showed up in the middle of the night to do this and felt that they were fraudsters. As such, the officers said that they needed to verify the information and held onto the application until it was finally accepted and processed during office hours on 3 June.