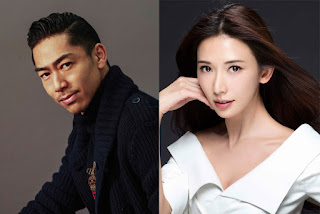 As posted earlier today, EXILE's AKIRA and Lin Chiling announced that they had gotten married on 6 Jun 2019. It's rare to have two surprise announcements two days in a row especially following a similar, if not bigger bombshell dropped by newlyweds Yamasato Ryota and Aoi Yu the day before. Here are more details about this couple and translations of excerpts from their respective statements:

- They filed their marriage registration in both Taiwan and Japan on 6 Jun 2019.

- They usually communicate in Japanese with a mix of English and Mandarin.

- Lin is currently not pregnant.

- The couple haven't decided which country they will be staying in. No plans yet for a wedding and there will be no press conference held.

- AKIRA's statement talked about how the couple were friends for a long time before they became an item last year. He praised his wife for treasuring her family members, friends and fans more than herself even though she is so busy and that he became attracted to her as he saw this and how she has a strong sense of responsibility and is full of love. Most of all, she is very accommodating, full of smiles and accepts him for who he is. He pledged to continue working hard for her and his family and asked everyone to continue supporting them.

- On the other hand, Lin's statement on her Instagram began by describing how she has always believed in a true love who belongs to her but had endured various knocks along the way in her relationships. After going around in circles, she found the right person after they met again at a different point in time and they gradually became so important to each other which led to their decision to get married. Although people say that love is a momentary gift, she feels that to turn this moment into eternity, courage, being accommodating, selfless, compromising and innocence are all essential elements. She pledged to face the unknown together with her husband as they make the future a reality and let the past become the past. Last but not least, she declared that she has gotten married and hoped that everyone who believes in love will find their own happiness one day.

Sources: Natalie / Lin Chiling's Instagram
Posted by Chiaki at 1:14 AM