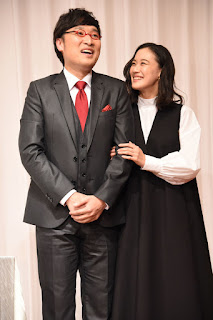 I'm sure that everyone who has heard or read about this news earlier on Wednesday would have been surprised or even shocked. For one, Aoi Yu and Yamasato have never been romantically linked before to date which is hardly surprising since they work in different fields and don't seem to have much in common. Then again, since they dated for just 2 months, it was probably too short for the tabloids to get wind of it.

As you can see from the photos and videos of the press conference, these two look so much in love that you probably need a pair of sunglasses to block out the rabu-rabu aura from them. ^__^

Here is a summary of the key information they revealed at the press conference:

- The couple announced their marriage through their agencies on 5 Jun 2019. Aoi is currently not pregnant. According to insiders, they registered their marriage on 3 Jun 2019 after dating for 2 months i.e. from early April 2019.

- Their announcement press conference was held at Hilton Tokyo which lasted more than an hour. This is considered way longer than the norm.

- The couple met through Yamasato's partner in the comedic duo Nankai Candies i.e. Yamasaki Shizuyo aka Shizu-chan who became Aoi's buddy after they worked in the movie "Hula Girls". Initially, they met as a group to go for meals and outings but gradually started going out on their own.

- Shizu-chan who appeared during the press conference with boxing gloves, "punched" Yamasato and "scolded" him for stealing her buddy which made Aoi laugh uncontrollably. Yamasato expressed his thanks to Shizu-chan for her help in matchmaking them because she would speak favourably of him in front of Aoi and vice versa. Shizu-chan revealed that she didn't know that they were dating with marriage in mind at first and only came to know about their marriage plans one week ago.

- When asked about what led to them deciding to get married, Aoi spoke first and revealed that there were various reasons such as how he is able to make her laugh so much, them having similar values on matters such as the things which make them touched, angry and financial matters. She also said that him being the type to close the fridge door as soon as possible, being gentle and Yamasato's parents being very welcoming towards her were also key factors. However, the biggest reason was that he is a man who loves her.

- As for her wedding ring, Aoi said that she didn't want this when Yamasato brought it up because she is the type to misplace things especially those which are important to her. Since she feels that she might lose her ring as soon as within this year if she is to wear it, she would rather use the money on a trip for the two of them.

- Yamasato became fond of Aoi as soon as they first met and asked her if she would like to try dating him. He also told her about his intention to get married as soon as they started dating.

- Aoi revealed that when Yamasato went to meet her parents at her house, they were very happy to know about their marriage. She reflected that she had caused them a lot of worry to date and was glad that they felt happy about her decision. Yamasato then said that he promised her parents that he will try his best to make Aoi happy for the rest of their lives and asked for their permission to marry her. It appeared that Aoi's father had thought of how he would answer this question from his prospective son-in-law since a long time ago and rattled off all his answers in various settings to Yamasato. Aoi said that as she is an only child, she was glad that her father managed to realise his "dream" during that meeting.

- When asked about how they call each other, they said that they both go on a first name basis i.e. Yu and Ryota which led to gasps from the media who were at the press conference.

- At the end of the press conference, Aoi said that she forgot to mention how much she respects Yamasato for his serious attitude towards work especially since she's pretty lazy and would only prepare for things when work projects come in. However, when looking at her husband, she felt that she needed to change her attitude and pledged to support him as much as she can. Yamasato also said that he will do his best in work so that his wife can continue seeing him doing what he enjoys.