Fukuyama Masaharu to be back with new movie under Galileo series 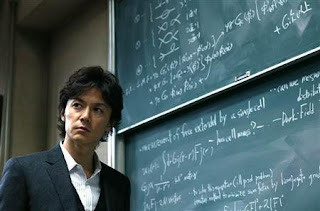 Fukuyama Masaharu will be back to play the role of Yukawa Manabu in the latest instalment under the Galileo series with a new movie "Manatsu no Houteishiki" (The midsummer formula) which is due to be shown in cinemas next summer. This is the first time in five years since he is appearing as Yukawa as the last movie "Yogisha X no Kenshin" was released back in 2008.

The Galileo series is based on a series of novels from Higashino Keigo and features the lead character Yukawa, a genius physicist who solves difficult cases. The series had its first drama adaptation in autumn 2007 via FujiTV and followed up with a drama SP "Galielo Episode Zero" and the film "Yogisha X no Kenshin" in October 2008. "Manatsu no Houteishiki" is the 6th novel in the 7-part Galileo series which was just published in June last year and boasts of sales to date totalling 300,000 copies. Filming for the new movie began on 23 September in Shizuoka Prefecture.

In this latest movie, Yukawa is invited to a presentation of a project to extract underwater minerals from the seabed and chances upon the strange death of a man at the seaside town. Co-stars include his longtime partner Shibasaki Kou who plays the female detective Utsumi Kaoru and Kitamura Kazuki who plays Yukawa's ex-classmate Kusanagi who is also a police detective. Announcements of the cast line-up are expected to be revealed at a later date.