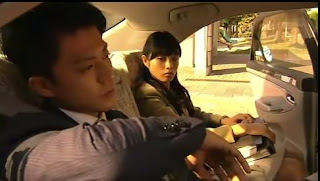 Hyuga and Chihiro get summoned to meet Fujikawa the next day after the meeting at the party despite a sour ending. Hyuga concludes that Fujikawa must have liked Chihiro a lot or else she wouldn't want to meet them so quickly. On the way home after the meeting, Hyuga throws a large amount of data to Chihiro and demands that she memorise everything by next week even though she protests slightly that she has other things to do. However, Chihiro has no way to say no to Hyuga and can only do his bidding.

Suddenly, Hyuga drops Chihiro off from the taxi they are sharing and states that he has somewhere else to go. Chihiro remembers the shoes she left in Hyuga's car and asks to retrieve them since she bought it with her brother's money. However, Hyuga finds it a hassle to return the shoes to Chihiro and tells her that he threw them away. He even hands her a 10,000-yen bill to buy a new pair which makes Chihiro cry and shout at him for his act of humiliating her with money.

Asahina is having a drink with Yamagami and complaining about Hyuga. In his drunken state, Yamagami says that they should raise a motion in the next shareholders' meeting to strip Hyuga of his CEO post. Just then, Yoko enters the pub to look for Hyuga but he is nowhere to be found. 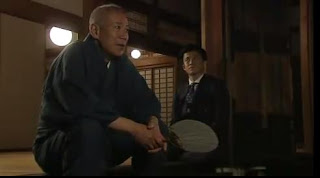 The following day, Chihiro is in school trying to memorise the information Hyuga gave her and chatting with her friends when Fujikawa happens to see her when she's at Todai to give a talk and this arouses her suspicion. However, Fujikawa doesn't confront Chihiro right away and proceeds to the venue where the talk is to be held.

At this juncture, Chihiro gets a letter to attend the final interview of a small company she had applied to previously and she reveals this to Asahina. Chihiro is thrilled that she's finally seeing some light at the end of the tunnel for her job search and she indicates that she will quit NEXT INNOVATION if she gets the job. However, on the day of her final interview, Asahina calls Chihiro and tries to suggest if she can come by that morning but stops short of saying so when he is reminded of her interview. Nonetheless, Chihiro still rushes to the meeting with Fujikawa who finds out that she had collaborated with Hyuga and Asahina to deceive her. Despite attempts to salvage the situation, NEXT INNOVATION is banned from meetings involving the ministry's future projects.

Feeling that she's responsible for the situation, Chihiro pays a visit to Fujikawa but is snubbed by the latter. Even so, Chihiro continues her daily visits to Fujikawa's office building and tries to explain that it was all her fault for lying to Fujikawa and Hyuga wasn't related to this. Fujikawa finally relates to Chihiro that she's angry not only about their lies but also the fact that Hyuga has always been prejudiced against her and fails to realise that Fujikawa is actually someone who also has the same aspirations as him in terms of their vision for the country's future. When Asahina tells Hyuga about what Chihiro did to apologise to Fujikawa, he merely dismisses her actions as that of what an useless person can do when things go wrong. 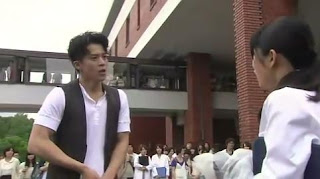 Surprisingly, Hyuga shows up at Chihiro's school one day amid the commotion among students who are surprised to see the celebrity CEO in person. He starts off by scolding Chihiro for being so stupid to skip her final interview for the sake of his company even though she isn't their employee. Moreover, he was the one who came up with the idea of lying to Fujikawa in order to get into her good books. However, Hyuga then tries to conceal his uneasiness as he attempts to apologise to Chihiro for causing the situation and even returns the pair of pumps which she left behind in his car. Although Hyuga appears to be scolding her, Chihiro realises that he is sorry about what happened and feels happy that he made the effort to come to campus personally. Days later, the ministry agrees to let NEXT INNOVATION continue to take part in its open meetings on the condition that Chihiro is hired as an intern in the company.

When Chihiro goes to visit Fujikawa for a meeting, the latter reveals that Hyuga followed her to where she was on a business trip and showed how he could process a large amount of data within 1 hour. This proved to Fujikawa that Hyuga has what it takes to make a success of the government projects which she has been trying so hard to make progress in.

The following day, Chihiro bumps into Hyuga in the lift as they head to the office. Hyuga notes that she's not dressed in a stiff black suit anymore and remarks that she's finally aware that it's summer i.e. insinuating that she didn't seem to feel hot in that stuffy suit when they first met. Chihiro smiles brightly as she basks in the indirect compliment... 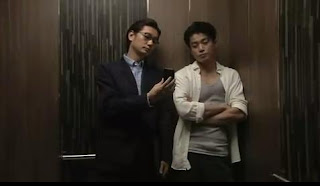 It wasn't a surprise that the truth about Chihiro's identity would be known to Fujikawa so quickly and to be frank, there were too many things which felt predictable in this episode. For example, when Chihiro wept as Hyuga gave her money for the pumps she left in his car, the humiliation that she felt was something foreign to him. This has been widely used in Cinderella stories when the insensitive rich guy alwys insults the poorer heroine by giving money for everything. Next thing would be Chihiro standing in front of Fujikawa's office building just to meet her and braving the elements as a result. Now, that's really over-used and it was plain boring to see Chihiro do the same thing. I would have wanted to see a more ingenious way of solving the issue. Nonetheless, it's Chihiro we are talking about so it feels logical as well for her to resort to old-fashioned ways to handle a crisis.

Hyuga's attention on Chihiro was initially sparked by her fake name and it is only a matter of time that he finds out. If he realises the truth after he falls for her, that would be a huge blow for him. I think it would be more interesting if he finds out before realising how he feels for her because it will take a lot for him to love her especially after she has lied to him once. For now, it does feel like he already feels affected by her emotions and actions as seen from his heart-to-heart talk with the temple monk. I don't think Hyuga will ever come clean with Asahina about his true feelings like the way he does with the monk. In fact, both of them have never shown their true selves to each other so I get the impression that although they appear to trust each other wholeheartedly as business partners, their personal feelings are a different thing altogether. Till now, I am still not convinced that Asahina is truly content to remain as a supporter of Hyuga. He will definitely step into the limelight soon to give Hyuga a run for his money and possibly, his woman as well.

At the moment, Yoko feels very much like a irritating woman who keeps hovering around Hyuga. It's not clear what kind of connection she shared with Hyuga nine years ago but for her to know so much about him, their meeting must have meant a lot to both of them even though Hyuga can't remember it now. I don't think Hyuga will talk much about his personal matters to a total stranger but if he felt that Yoko was someone who understood him then, he might have opened up. Remains to be seen if Yoko is fighting a losing battle or she will be a serious competitor against Chihiro.
Posted by Chiaki at 11:01 PM