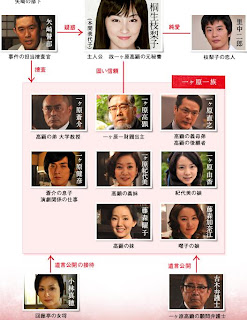 Kiryu Eriko, the secretary of tycoon Ichigahara Takaaki, suffered burn injuries when she was a kid and bears the scars of that accident even as an adult. Despite her looks, she was highly trusted by Takaaki. She had a boyfriend Satonaka Jirou who allegedly committed a double suicide with her at the Kairoutei ryokan. Shocked and baffled by Jirou's suicide, Eriko attempted to kill herself but she survived with injuries to her face. Thanks to Takaaki's good friend Honma Kikuyo, Eriko managed to get a plastic surgery and took on the identity of Honma's daughter Kikuyo.

Takaaki passes away and the 49-day rites are to be held at Kairoutei where his will is to be read out by the lawyer Furuki. Miyoko a.k.a. Eriko takes part in the ceremony on behalf of Kikuyo and attempts to find out who had tried to kill Jirou and her...

Frankly speaking, I think the story suffered from a similar problem like Brutus no Shinzou. In Brutus' case, the problem was the culprit not figuring in the main picture for most of the drama SP. In Kairoutei's case, the culprit wasn't even seen until the end. There was a bit of an excitement by the time the culprit appeared but I have to say, viewers probably can't guess it was going this way until that person showed up. In addition, the ambiguous ending also means that viewers are left guessing what happened to Eriko and the mastermind because they were just pictured lying down in the fire.

Acting-wise, Tokiwa Takako does a good job as usual although I thought that long hair was a bit awkward-looking. It's also not easy to tell when the story was set in because the clothes worn and how they spoke seemed to be reflecting an era not in modern days. Her chemistry with Tanaka Kei was a little lacking but it can't be helped since their characters are supposed to incompatible and poles apart in the first place. As for the rest of the cast, they didn't leave much of an impression on me except for Naitou Takeshi who had some brilliant scenes with Tokiwa when he was trying to leave traps for Miyoko to expose herself.

And my ratings for this drama...
Story: 3 out of 10 (It would be better if there were some clues leading to the culprit instead of having the person appear right at the end)
Acting: 6 out of 10 (Generally passable acting but other than Tokiwa and Naitou, nobody else really stands out)
Theme song: 3 out of 10 (No impression of the BGM nor any theme song)
Visual effects / Scenery: 5 out of 10 (Most of the scenes took place in the ryokan so there's nothing much that catches my attention)
Teamwork / Chemistry: 6 out of 10 (For Tokiwa vs. Naitou, not Tokiwa vs. Tanaka)