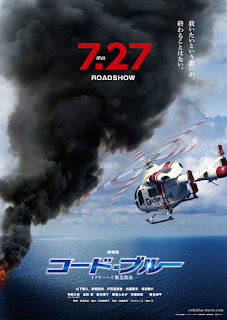 Motion Picture Producers Association of Japan, Inc. announced key statistics of the Japanese movie industry in 2018 and the list of Japanese movies which crossed the 1 billion yen mark in box office takings during its New Year press conference on 29 Jan 2019:

- "Gekijouban Code Blue Doctor Heli Kinkyuu Kyuumei" was the No.1 Japanese movie in the box office (JPY 9.3bn) but lost to "Bohemian Rhapsody" (JPY 10.46bn) in terms of the overall ranking. Note that the latter is still showing in cinemas as of now so the total takings are set to go even higher.

- 1,192 movies were released in Japan within 2018 of which 613 were domestic productions while there were 579 foreign movies.

- It has been 15 years since 2003's "Odoru Daisousasen THE MOVIE 2 / Rainbow Bridge wo fuusaseyo!" that there was any Japanese movie which achieved box office takings of more than JPY 9 billion. Other than "Code Blue", "Meitantei Conan Zero no Shikkounin" was the other movie at No.2 which achieved this feat.

- There were 31 Japanese movies and 23 foreign movies which crossed the JPY 1 billion mark.

- 2018's figures were the 3rd best since 2000 even though there wasn't a super hit among the offerings last year.

- Average ticket price was JPY 1,315 which was 0.4% higher than 2017, thanks to more screenings at 4D, IMAX and Dolby Atmos theatres which usually charge higher prices.

Here is the list of Japanese movies which crossed the 1 billion yen mark in 2018 with their box office takings reflected within the brackets (Note that for some films which were shown towards the end of the year and are still being screened, the final total takings are subjected to change):