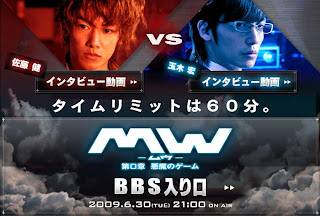 As this drama is a prelude to the movie version starring Tamaki Hiroshi and Yamada Takayuki, you will notice that the main cast members in this SP are not appearing in the actual movie itself. Nonetheless, these characters are still linked to the plot of the movie in one way or another.

Satou Takeru plays Morioka Takashi, an orphan who has just lost his job in a factory and is troubled over where to find money. When he goes back to the orphanage he grew up in, he finds that it is facing finance problems as the orphanage's owner has just passed away. His daughter, Watanabe Yukari wants to keep the orphanage going but is helpless to do so. When the orphanage is forced to shut down, Takashi happens to bump into an ex-colleague Sakurada Kousuke who introduces him to a private courier job. Although Takashi has reservations about this job, he still decides to take it up since he needs money.

Subsequently, Takashi earns the trust of the boss behind the scenes, Yuuki Michio who tells him that he can change the world by working for him. Yuuki gets Takashi to commit some crimes in Robin Hood fashion where they seize dirty money from the rich and give to the poor. Although Takashi manages to get the orphanage back with the money he received from these jobs, he is constantly on tenterhooks and starts to get cold feet when he realizes that the police are suspecting him. At this time, Takashi then receives instructions from Yuuki about a job which is going to reveal his own past...

If you view this SP on its own (since I've also not been able to watch the movie yet), it gets quite thrilling whenever the parts of Takashi being manipulated by Yuuki's game are shown. The story zips between the current happenings and what led to the current situation. It does get a bit dry when the background of events is explained but tension starts to build up from the middle of the story. However, due to the constant mention of events 16 years ago which led to the wipeout of an island's inhabitants, it gets a bit confusing because we have little information as to what really happened. I believe the answer should be found in the movie. Never mind if you don't get what is going on. The SP is merely to entice viewers to find out the answer for themselves in the cinemas. This is a commonly used tactic these days to boost box office takings but I'm not sure if it helps a lot. At least it does stir up some interest for me but I doubt this movie will come to our local cinemas. Given the subtle hints of a homosexual relationship between Yuuki and Garai (Yamada Takayuki) and the generally violent storyline, I am wondering if our censors will let it pass, assuming if any film distributors want to bring it in.

Satou Takeru does impress me this time. Frankly speaking, his performance in Mr.Brain bored me to tears. I can't really blame him because he had a role which didn't have much room for development. This time round, he started off with a plain potrayal of Takashi who seemed so unaffected even when he got fired but as the story went on, he managed to show the various emotions of Takashi. However, his looks may stand in the way when it comes to future developments because it is easy to stereotype him as a delinquent guy based on his blonde hair and that heck-care attitude especially when he looks emotionless. There are lots of young actors these days who belong to the same category so competition is definitely keen. Hopefully, he can work on improving his acting skills and changing his image as he grows older or else he may find it hard to carve a niche for himself in this industry.

Tanimura Mitsuki is severly under-utilized this time because her role is very small. As such, it will be unfair to say that she did badly since she appeared as a damsel in distress for most of this SP. She is definitely capable of a better performance. Likewise for Koide Keisuke, since he was in the SP to make a friendly appearance (for the sake of Chiaki-sama?! ^___^), he too did not have much room to show his stuff. Frankly speaking, the most memorable performance I've seen from Koide was his potrayal of Masumi in Nodame Cantabile. Till today, I am still unable to forget that afro-style otome Masumi who pines for Chiaki (Tamaki). Maybe that's why Koide appeared in this SP on a friend basis.

Talking about Tamaki, he also did not have much airtime. However, as he is a key figure in the SP and movie, his scenes are significant enough to have an impact. At least I could see the major change in Tamaki as he moves on from comedy or romance genres like Nodame Cantabile or Love Shuffle earlier this year. Boy, he was so cold and cruel! There was absolutely no trace of emotion from his performance which lends credibility to the evil nature of Yuuki as potrayed in the manga. You certainly wouldn't be able to link Yuuki to Chiaki-sama or Usa-tan. However, it remains to be seen if he will be evil throughout the movie or will change for the better if his buddy/lover Garai (Yamada) manages to change him.

And my ratings for this drama SP...
Story: 7 out of 10 (As a teaser prelude to the movie, it fared OK. However, the inconsistency in pace would have turned people off from finishing this SP in the first place. This defeats the purpose since the best is yet to come.)
Acting: 8 out of 10 (For Satou Takeru and Tamaki Hiroshi)
Theme song: 5 out of 10 (I didn't manage to hear the song until the end of the SP and it didn't leave a strong impression on me.)
Visual effects / Scenery: 6 out of 10 (Given that this is just a teaser, I guess funds are limited so there isn't much scenery or effects to speak of.)
Teamwork / Chemistry: 6 out of 10 (Although Tamaki had less airtime than Satou, the latter was evidently overpowered when the confrontation scene came along.)

wow. for so long ive been reading your posts. and i really love your reviews. i've nvr thought you are actually a fellow Singaporean. :D
i was really hoping the MW would be able to show in Singapore, but with all the restrictions and the "biasness" towards kor films nowadays. i doubt there would be any chance of it showing in Singapore. :(